In their simplest form retail fireworks tend to be made up of cardboard tubes – or multiples of tubes – filled with a chemical composition. They are sealed at one end with a bung (usually clay). A ‘lift charge’ is put on top of the clay and covered with a cardboard disc which has a hole in the centre. This hole allows ignition of the effect by the lift charge. On top of this disc the firework effects are placed whether they be mines or ‘stars’.

The tubes are then grouped together to form ‘cakes’ and a fuse added between adjacent tubes to create the finished firework.

To import a firework into the UK (or Europe) that firework must be classified (according to risk) for transport. It must also be CE marked. These steps are necessary to ensure compliance with the relevant safety legislation. In the UK all such classification in undertaken by the HSE.

Cakes/Barrages
2 words for the same item. Cakes consist of a group of fireworks that can be set off in succession, allowing for a totally customised mini display in one small package. Cakes utilise an internal fuse system that allows the fireworks to ignite automatically, either all at once or in a pre-determined order. Must cakes will last for at last 30 seconds, whilst some packages may fire for minutes at a time, with some containing in excess of 100 tubes. Cakes come with straight or fanned firing, the fanned firing obviously has a much wider spread and creates a sky filling canopy. The calibre is the internal diameter of the tubes, and generally range from 12mm right up to 30mm, which is the maximum allowed under the current regulations.

The most commonly known type of firework, when launched into the air the Rocket can climb to an enormous height. Depending on the type of rocket used, some can reach 30 – 60 metres before exploding with an enormous sky filling canopy.

Roman Candles
Roman Candles are typically made up of a single cardboard outer casing and filled with individual comets which shoot out stars periodically after ignition. A number of effects are available for these fireworks, including crackles, comet stars and glittering bursts.

Fountains
Fountains are a great option for those who want to experience the beautiful visual element of a firework but without the loud and often surprising sound effects, such as bangs and whistles. Fountains are so-called as, once lit, they release a shower of sparks. The size of the Fountain container will dictate the size of the shower and how long it will last – some Fountains can last for several minutes in total.

Catherine Wheels get their name from St. Catherine who, according to legend, was to be martyred upon a spinning wheel. The noise effects associated with Catherine Wheels include crackles and whistles, which are emitted as the coil spins. Catherine Wheels are great to watch on their own, but they can also be set up in different arrangements.

Single Ignition Displays
This is a complete display in a box. Most products lasting at least a minute and providing a whole range of different effects and colours. Most popular with people purchasing a finale style firework or something to take along to a party.

A firework that fires straight up into the air will require far less space than a firework that is fanned. Remember NEVER place a fanned firework in such a way that it’s effects will eject towards the crowd. 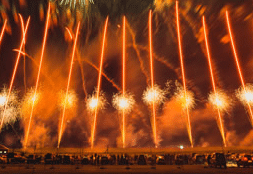 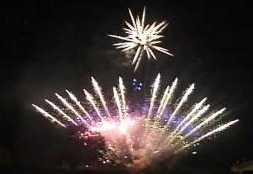 As a general rule the larger the calibre the higher the effect will go. Calibres range from 14mm in our roman candles to 30mm in the larger cakes & single ignitions.

The category gives an indication of how powerful a product will be. The category is decided when a firework undergoes testing for CE approval.